Scientific Management International (SMI) are leading suppliers of bespoke subsea cable and connector harnesses for both commercial and civil purposes.

They supply the submarine industry worldwide, including Britain’s own nuclear fleet, having held uninterrupted Capability Approval from the Ministry of Defence for over 20 years. So reliability is absolutely key: the company’s mantra is ‘right first time, every time, fit and forget’.

That same reliability is just as vital in other hostile environments, which is why the company’s technology is increasingly being used in the wind and tidal turbine industries, as well as transport, including aerospace. Anywhere a broken cable or connection is unthinkable, SMI’s harnesses are indispensable.

A Science Not An Art 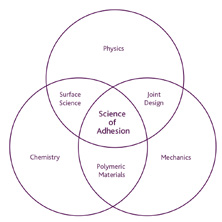 Reliability is very much a science, not an art. They deliver unrivalled subsea cable and connector reliability by amalgamating advanced chemistry with pioneering thermoplastic pressure moulding techniques. Above all the company understands that reliability comes down to one very important technical detail: moulded terminations that will not fail; and all successful moulded terminations are based on a combination of different aspects of science and an understanding of the interaction between them. The science of adhesion lies at the intersection of physics, chemistry and mechanics.

The desire to hold different surfaces together dates back millennia. Early humans made tools and weapons using beeswax, tree resins or blood mixed with stone-based inorganics to bind different parts together. But until very recently, it was very much a case of trial and error. The emergence of modern science would revolutionise how people approached the age-old problem of binding objects together. In the 1840s, the science was sufficiently advanced that an industry of synthetic bonding agents was born. SMI stands in that tradition, but also brings it into the 21st century with innovative solutions to the challenges thrown up by modern subsea industry.

How Bonding Works And What Can Go Wrong

Mouldings rely on a chemical covalent bond to the main connector or gland housing, combined with the subsea cable. Numerous factors, operating at the atomic level, can affect durability of this bond. That is why it is critical to put in place a rigid, controlled process of surface preparation before bonding. Then, adhesion is initiated by wetting the surface and activating a primer.

Primer activation can be achieved by chemical reactions initiated by factors like heat, pressure, curing agent or UV light. Curing time, rate and temperature must be optimal to avoid both under and over curing, resulting in incorrect polymerisation. Humidity, air quality, or pH can also adversely affect primer curing. And when exposed to the sea, metals on the structure are subject to a number of corrosive reactions.

One example of how these effects can adversely impact bonding is a condition in the structure components called ‘cathodic delamination’ which strips layers of plastic from a laminated metal surface.

What Is The Solution?

A thermoplastic process involves a high-pressure molten material being forced into a high-temperature tool to achieve the desired moulding shape in conjunction with the connector housing.

SMI’s advanced processes use this high temperature and pressure to achieve the high bonding performance of the thermoplastic polymers. During this process there are many factors that if not controlled will result in a failed termination, such as internal voids, inclusions, cracks, sinks, poor adhesion, poor amalgamation and internal subsea cable faults like open circuits and insulation breakdown. A proper understanding of the thermoplastic properties of the materials and the chemistry involved in achieving a successful termination means these faults can be avoided.

For example, corrosive issues such as cathodic delamination can be overcome by a better understanding of the chemical reactiveness of the materials used. Replacing metallic components with non-metallic materials with a high level of inertness and rigidity can reduce the effects of cathodic delamination and other corrosion effects. 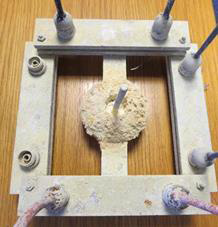 Non-metallic components with Polyethylene and Polyurethane mouldings are shown on the outside of the frame. The sacrificial anode is at the centre of the frame.

SMI know all about long-term reliability, which is why their thermoplastic technology has been used around the globe for decades on submarines and ships. That same technology has obvious applications in tidal turbines and for offshore wind energy – and indeed any industry that depends on cables to conduct power and data in hostile environments. The amalgamation of advanced chemistry and thermoplastic pressure moulding techniques ensures an unrivalled subsea cable and connector reliability is delivered with fit and forget: 10,000 installations and zero leaks. Bound to succeed!